Modena is part of the Rete Nazionale Città di Motori (National Motor Cities Network), since it is a true cradle for “four-wheeled works of art”. As Enzo Ferrari's birthplace, it was the home of the fortunate automobile company, today celebrated at the Museo Enzo Ferrari. Since the late 1930s, it has also been home to the Maserati factories, and just outside the city, the Umberto Panini Museum, which collects historical models of the “House of the Trident”. However, Modena’s connection with motors has much deeper roots. In fact, Casa Stanguellini, in 1900, was the first to link Modena’s name to motors. In addition, the city was home to the De Tomaso plant, a particular Aero-Autodrome and, today at its doorstep, it hosts a newly constructed Autodrome. Finally, within its province, still stand the Ferrari factory in Maranello, Pagani Automobili, and the private Righini collection.

Modena has been inhabited since ancient times and was founded in Roman times. After a long period of abandonment during the early medieval period, it re-populated becoming a municipality and gracing itself with a new cathedral, the current Duomo, a masterpiece of the Roman age. Ending up under the rule of the Estense, Modena became the capital of the Duchy in 1598 until the unification of Italy with a few interruptions inbetween.

Modena’s Roman cathedral is a milestone of medieval architecture. Together with its civic tower, (known as Ghirlandina) and Piazza Grande, it has been UNESCO heritage since 1997.

Modena preserves different witnesses from its long stint as capital of the Estense State. The Duke’s Palace, once the living quarters of the Dukes, is now site of the Military Academy. On the contrary, the Estense Gallery exhibits paintings and artwork belonged to the Este family.

Apart from the Estense Gallery, Modena’s museum offer includes the Lapidario Estense Museum, the Roman Lapidario, the Civic Art Museum and the Civic Ethnological Archeology Museum. All of them are inside the “Palazzo dei Musei” (Palace of Museums) building. In the basement of the same building, it is possible to visit the Giuseppe Graziosi Gipsotheque. In a different site you can find the Museo della Figurina (Sticker Museum). Founded in 2006 from the Giuseppe Panini collection of stickers, it is a unicum in terms of quantity and quality of the heritage it preserves.

Modena Civic Gallery is a historic centre of cultural production through the set-up of art and photography exhibitions. This second artistic area is also valued by the activities of the Fondazione Fotografia Modena (Foundation of Modena Photography), a centre for exhibitions and training activities. Finally, a new cultural space has recently opened to the public: it is the MATA, created from the redevelopment of the Ex Manifattura Tabacchi (former tobacco factory).

The places of Luciano Pavarotti

The famous tenor Luciano Pavarotti was born in Modena. Now his villa has become a Museum Home open to the public to introduce the more familiar and daily aspects of “Big Luciano”. Moreover, the municipal theatre of the city, built in 1841, has been named after him.  The theatre still has an active programme and can be visited upon booking.

Modena and the places dedicated to engines
Modena hosts the Museo Enzo Ferrari, an involving and emotional place where the Drake’s past mixes with the Ferrari models that made history, all of it in a particular framework: a futuristic structure in the shape of a Ferrari bonnet and the workshop of his father Alfredo, restored to original appearance. (http://museomodena.ferrari.com/it).

Just outside the city, the agricultural company “Hombre” hosts the Umberto Panini Collection: it is one of the most complete Maserati collections in the world (www.paninimotormuseum.it).

Talking about Maserati, in Via Divisione Acqui 19 (Modena) you can find the Trident factory and showroom. The industrial works can only be visited upon booking and depending on availability by sending a request to factorytour@maserati.com. The showroom visit, open from Monday to Friday from 9 am to 5 pm, allows visitors to appreciate the technical characteristics and the design of the entire selection on show. www.maserati.com factorytour@maserati.com info@modenatur.it

Finally, the Modena racetrack can be found in the area of Marzaglia, and it's the ideal place to try out your own car or sports motorcycle. The racetrack is a year-round site of events connected to the motorsport world. (www.autodromodimodena.it).

Modena is the Italian province that is the richest in DOP and IGP products, and is famous all over the world for its excellent cuisine. For a “greedy tour”, the ideal place to go is the Albinelli Indoor Market, historical market a few steps away from the Duomo, opened in 1931, where it is possible to find all the products of the region accompanied by aperitifs and tastings.

The flagship product is the Traditional Balsamic Vinegar, rendered special by use of a century-old procedure. The only ingredient is cooked grape must from local grapes, aged in “batteries” of several wooden barrels through a precise procedure of decanting and earthing up. One of the traditional vinegar cellars is kept in the attic of the Town Hall.

The territory of Modena is part of the Parmigiano Reggiano production area, the king of cheeses. As for wine, the area’s speciality is Lambrusco, produced in four DOP variations. Light and sparkling, it enhances the tasty cuisine of Modena.

The processing of pork meat is another matter of pride of the city, which is famous for its hams and salamis. Among them the Modena Prosciutto DOP (ham), the Zampone Modena IGP (pig's trotter stuffed with seasoned mincemeat), and the Cotechino Modena IGP (large pork sausage that requires cooking). Amongst the first courses, Tortellini get a special mention: little puff pastry squares folded over a pork meat filling, ham and Parmigiano Reggiano cheese. Last but not least, the desserts: Bensone, Zuppa Inglese (dessert layering custard and sponge cake), Amaretti and the Amarene Brusche of Modena (black cherries), all of it washed down with a glass of Nocino, traditional liquor made from walnuts.

Ferrari, Maserati, Stanguellini, De Tomaso are the names that have linked their history to Modena, the city that today hosts the home of the Enzo Ferrari Museum, the important Umberto Panini Museum private collection, and the factory of the Trident.

Old barrels for the production of Modena traditional balsamic vinegar. 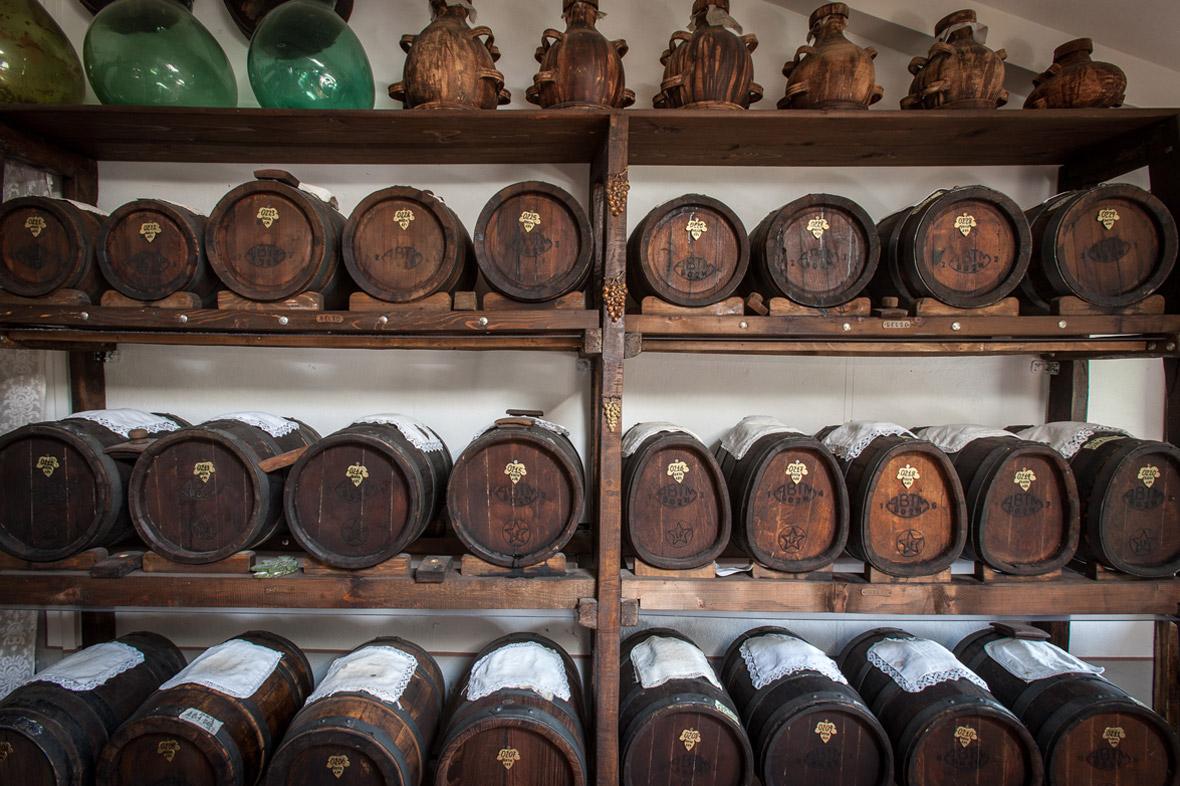 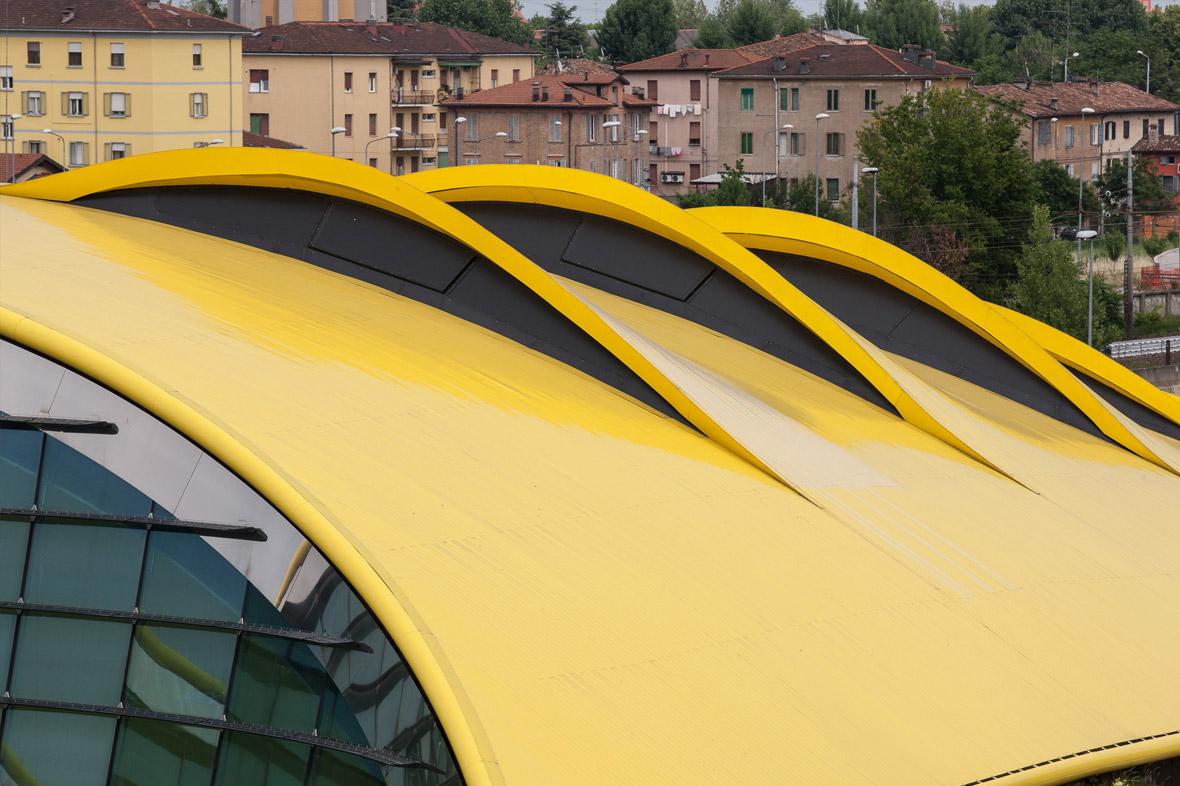 "Via Emilia" through the old town centre of Modena. 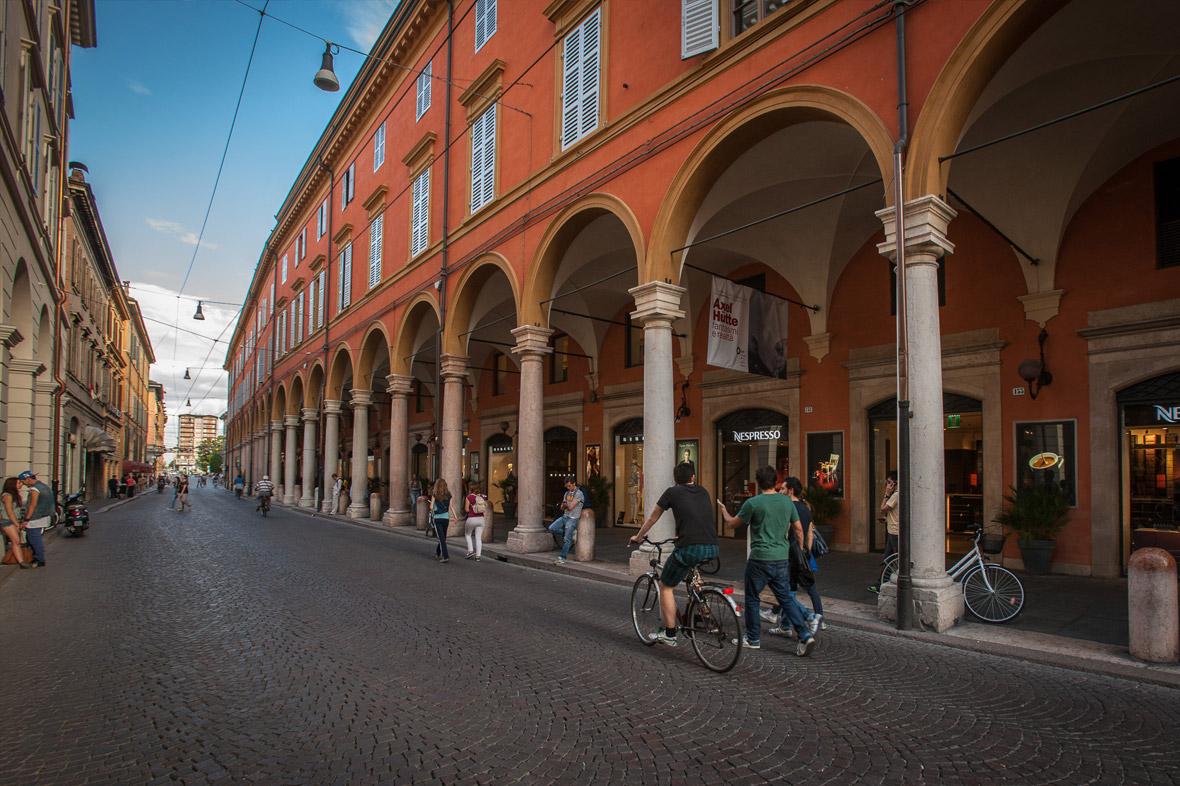 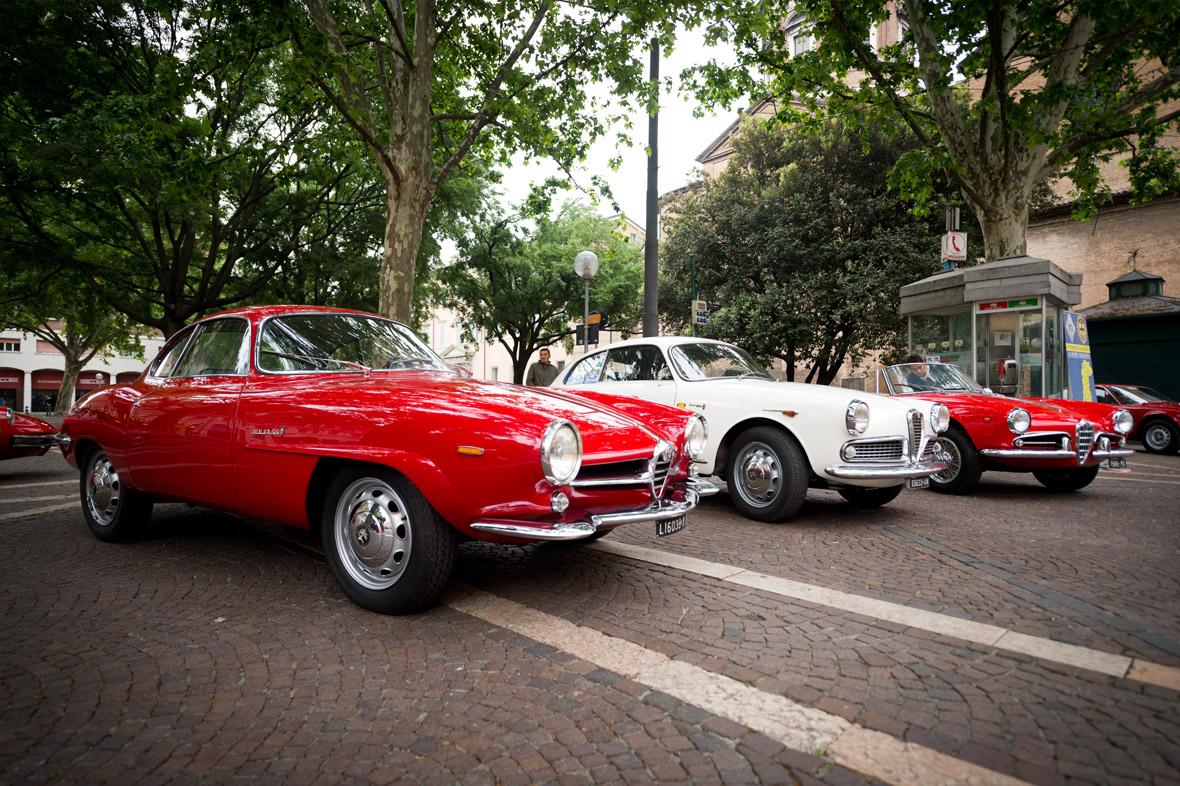