Mandello del Lario is part of the Rete Nazionale Città dei Motori (National Motor Cities Network) thanks to Moto Guzzi. The factory was founded in 1921 by Carlo Guzzi, Vittorio Emanuele Parodi and his son Giorgio Parodi, and is still being talked about. Over the years it has generated a dependency, favouring companies setting up shop that are involved in the motorcycle sector, like Gilardoni Cilindri (cylinders) and Lanfranconi Silenziatori (silencers). Moto Guzzi is the reason behind the economic, social and urban development of Mandello: over the years it has become a legend in the world of road and racing motorcycles. It has also been able to diversify production by building solid groundwork in three-wheeled vans and agricultural machines sectors. All this without ever losing sight of innovativeness and continuous research, the real flying banners of the Moto Guzzi company. Other inventions carry its name, such as the first Wind Tunnel for motorcycles and the elastic frame. Today the Guzzi legend lives on through the company’s museum in the heart of the Mandello factory.

Mandello del Lario is a quiet town on the shores of Lake Como. Its origin is very ancient, its nucleus is a compact structure and parallel streets reminiscent of the tipical layout of a Roman  castrum. The old citadel also demonstrates the traces of the medieval period and parts of the fortified walls which unce upon a time surrounded and provided the city with protection: we can see the first floor of the pretoria tower and part of the San Vittore door. Nowadays Mandello is connected to the navigation service of Lake Como thanks to the escalade in Piazza Italia. The area surrounding the city offers numerous picnic areas for outdoor excursions dedicated to nature and the historical and artistic heritage.

The civil Tower of Barbarossa

You can visit the Maggiana part of the Tower of Barbarossa if you book ahead of time. It got its name because in 1158 the Mandelli family allowed the Emperor Federico to sojourn here. The Tower was built in the XII century, it preserves the remains of the frescoed trophies and today it is the site for the Etnographic Museum. Reworked over the years, the ninteenth century terrace offers a beautiful panoramic view onto Lake Como and the Alps. Every year in the month of June, it is the focal point of the medieval costume festival called “La Torre in Festa (festival of the tower).”

There are at least two ancient churches to visit. The first one is the Church of St. George, the structure of which goes back as far as the High Middle Age. Its cycle of frescoes made in the second half of the fifteenth century makes it a very well known place on Lake Como. The second one is the  Church of St. Mary, known about since 1145 and turned into a Benedictine hospice by 1335. It is placed at 660 metres on the roadside of the ancient road that connected Mandello to the Valsassina, which can be reached by going along a path which first has vines and then olive groves running alongside, then densely grown trees. It is marked by a cross every 100 steps to form a Via Crucis.

The wayfarer’s path and the Resinelli Plains

Remaining on the subject of naturalistic routes, the Wayfarer’s Path is a well signposted trekking itinerary, 45 km in length. The path has very ancient origins, its mule driver stretches were for a time an alternative route for transporting along the lake, connecting a range of soil fortifications.  Mandello is one of the destinations. From here, the lane even goes past the church of San Giorgio reaching all the way to the Tower of Barbarossa. Finally, the Resinelli Plains zone is an interesting destination for mountain lovers, rock climbers and excursionists. At the foot of the Grigne Alps, at 1300 metres, it is possible to enjoy a beautiful view which spans from the Rhaetian Alps to Mount Rosa, imposing on the plains below, Lecco Lake and the basins of high Brianza. Among the attractions of the area are the ancient lead mines used since the XI century to the second World War, and the adventure park.

There are three unmissable destinations for people who want to get to know the legend of Guzzi, which began here in Mandello. The first one is the Museo Moto Guzzi, near the factory works, with its collection of 150 unique pieces. The museum is open from Monday to Friday (3:00 pm – 4:00 pm), during the month of July opening times are anticipated to 2:30 pm and closing times post-poned to 4:30 pm. The second is the officina del Fere' (the workshop), in Via Cavour 8, where Carlo Guzzi built his first motorcycle in 1919. The third is the monument dedicated to him in Leonardo da Vinci Square. It was financed by Mandello council and the “Anima Guzzista” (Guzzist Soul) association, created by the Marchesian sculptor and motorcyclist Ettore Gambioli and the architect Paolo Gambelli in 2011.

To finish it off, a little taste of enogastronomic typicalities. Typical Mandello cuisine is from produce around the lake, based on fish. The “misultitt” (allis shads dried in the so-called “missolte”), soused fried and marinated fish, crunchy alborelle (bleak) and other traditional dishes like risotto with fillet of perch, oil smoked trout and whitefish. In the surrounding valleys “poor people’s cooking” dominates with its base in yellow polenta, buckwheat or black flour, taragna or cunscia (for those who love garlic!). Local production of oil and cheese gives the rest of the picture. Three classic Mandello desserts: Grigna cake (with toasted almonds and hazelnuts) the Meascia (made with corn flour and wheat, enriched with apples, pears, grapes, nuts, hazelnuts and figs) and the Paradèl (fried dessert with aromatic herbs and again, apples).

The “Società Anonima Moto Guzzi” (Anonymous Moto Guzzi Society) was established in Genova, but soon moved to Mandello: a calm place away from the disarray of social anxieties, in which to fine-tune a motorcycle designed for success.

The laboratory where first Guzzi motorcycle was assembled. 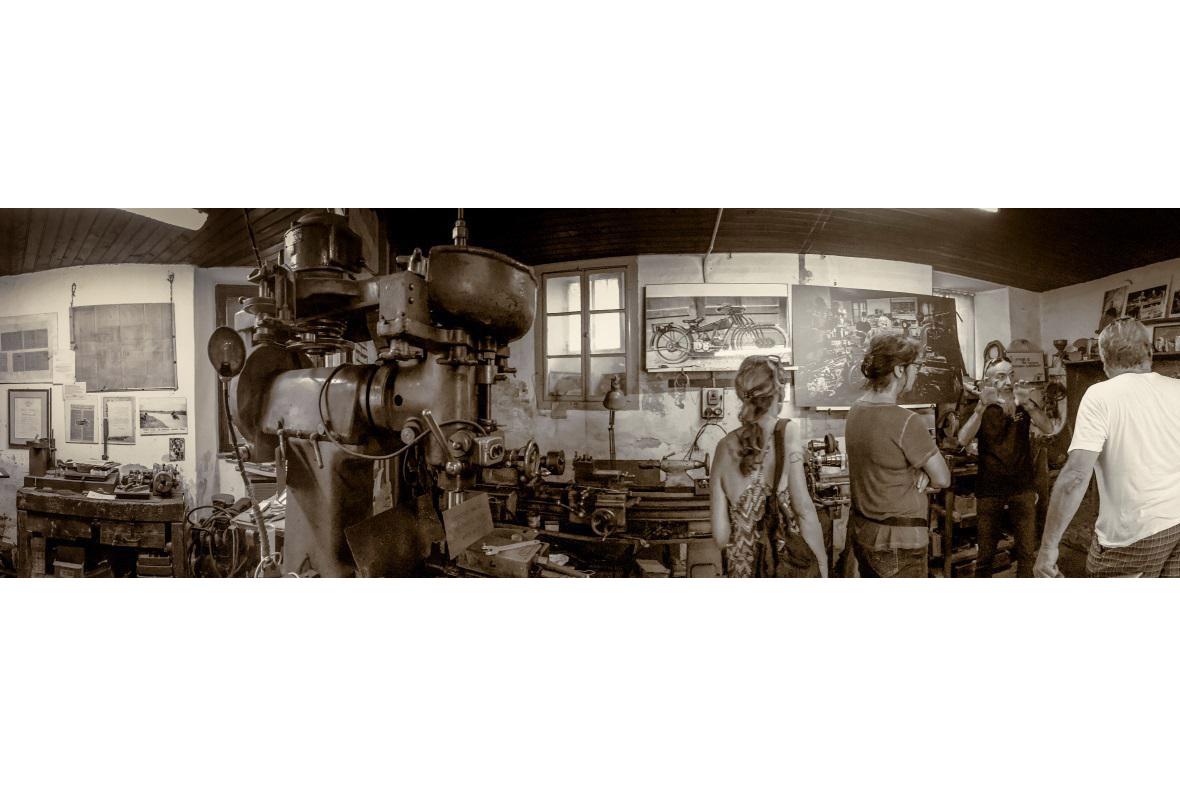 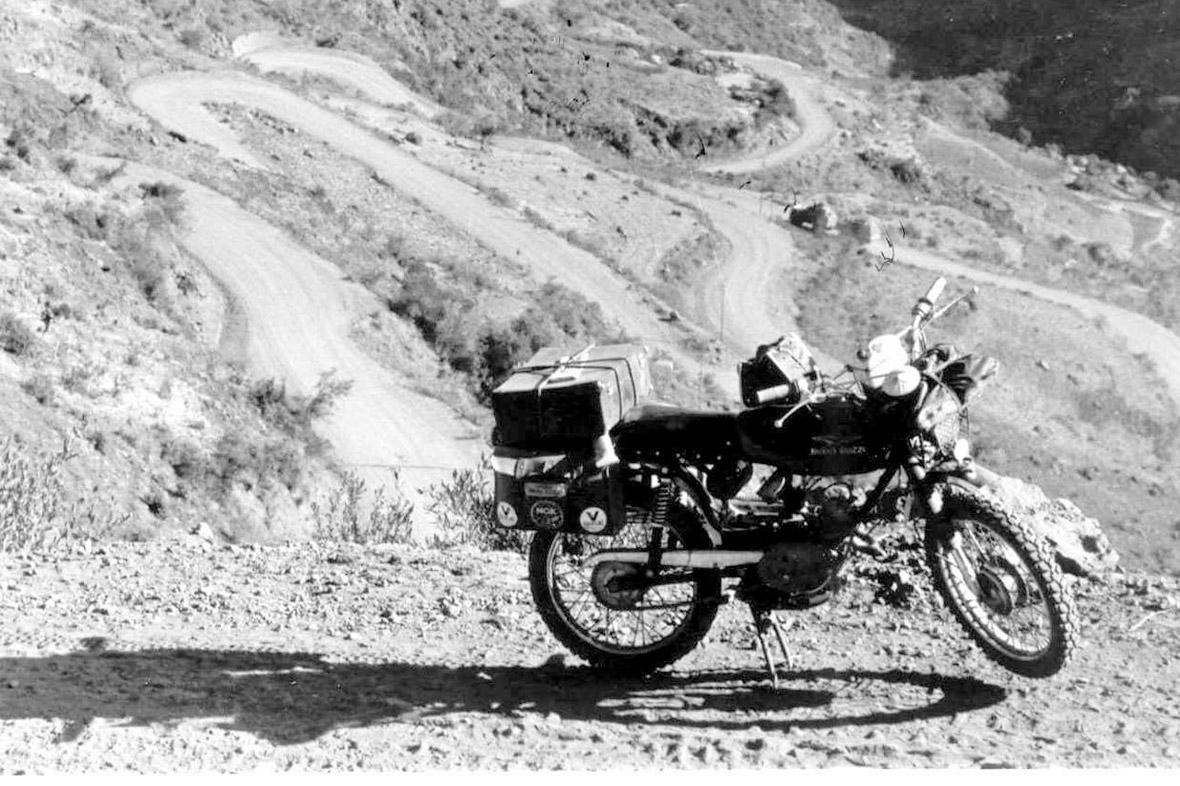 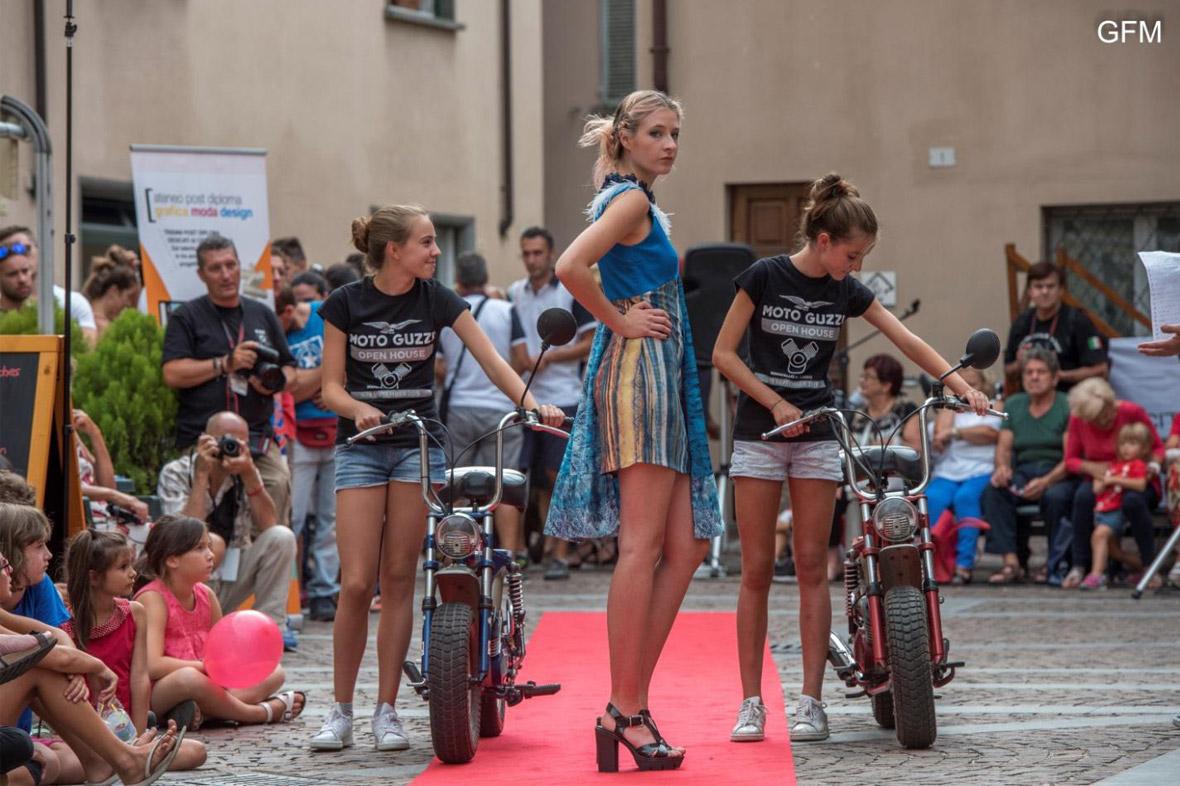 The monument dedicated to Carlo Guzzi. 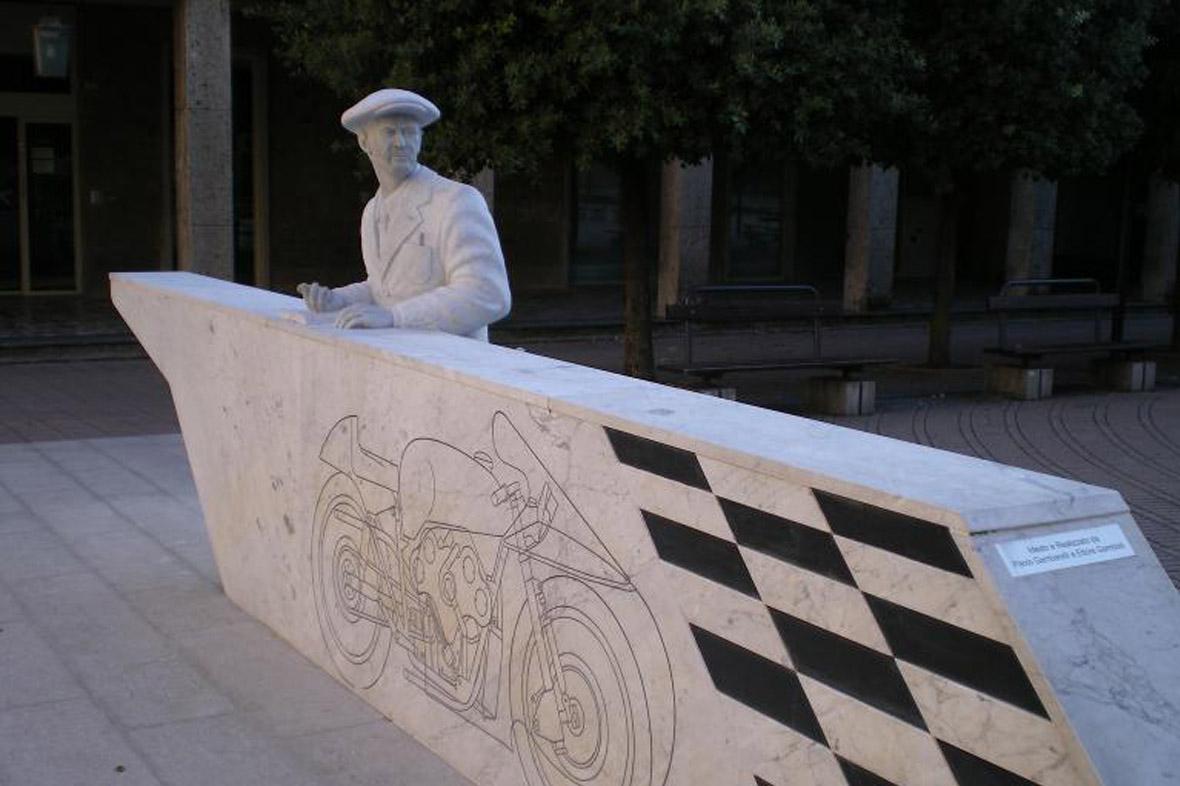