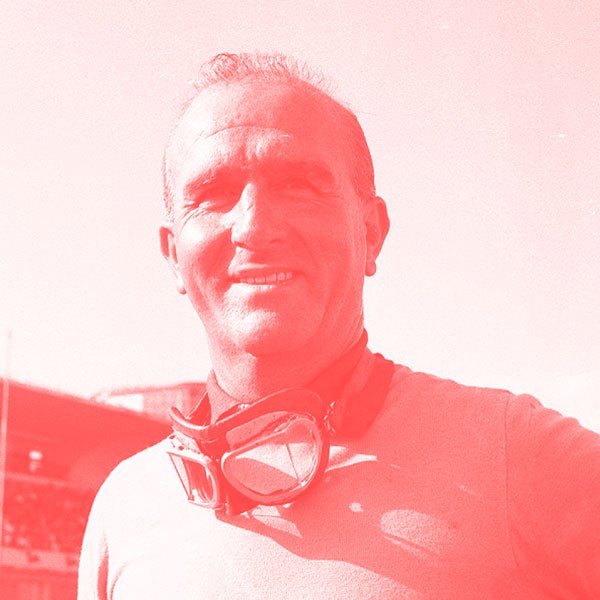 The record man is the summation of tricolour four-wheeled supremacy: aboard an Alfa Romeo, he was the first to win the Formula 1 World Championship, during which he won the first Italian world champion Grand Prix .

Class od 1906 from Turin, Farina deserves a special place in the motoring Hall of Fame for the series of records associated to his name: winner of the first edition of the Formula 1 World Championship driving an Alfa Romeo and the first world champion Grand Prix at Silverstone in which he brought home the pole position and fastest lap.

After all, Farina has cars in his blood: he is the nephew of the famous coachbuilder Battista “Pinin” Farina, the legendary designer of four-wheeled Made in Italy. He debuted as a driver in the 1930s, picking up several important successes and prestigious placings, as three second places at the Mille Miglia. After fighting in World War II, Farina returned to racing as a more mature man, but without having lost that ruthlessness and love for risk that made him famous and which he would need to face the net challenges with drivers far younger than himself.

After the world champion triumph in 1950 (flavoured also with the honour of being the first winner of the Italian Grand Prix in Monza) , Farina remained a protagonist of the Formula 1 World Championship, still duelling for the title with other legends as Alberto Ascari and Juan Manuel Fangio. From 1952 he went to the court of Enzo Ferrari, who would write about him in his book " Piloti, che gente…": “Farina was a man with a courage that bordered on the unlikely. A great driver, but one you were always apprehensive for […]. At the start he was like a thoroughbred at a starter tape […]; near the finish he was capable of madness, but only risking himself without unfairness and damage to others. Therefore, he had a subscription to the hospital ward”.

He stopped his competition career with the Reds in 1955, after having etched his name forever among the car racing legends.