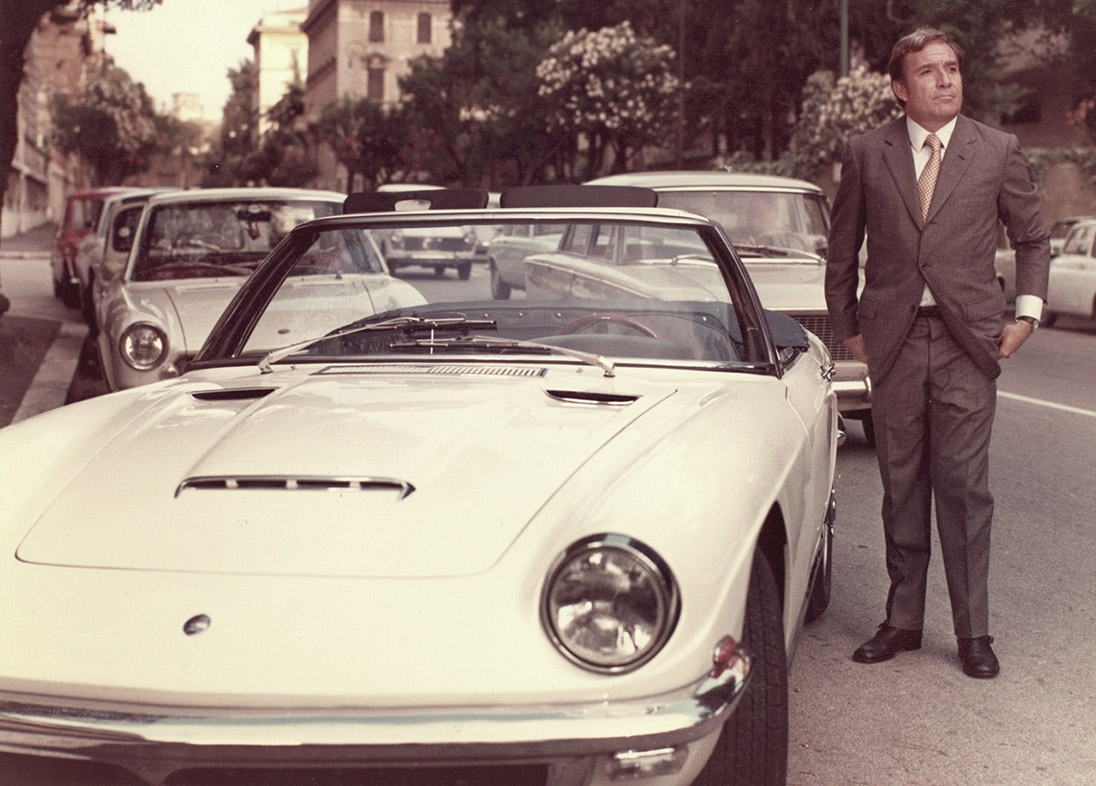 A journey through Italian and foreign movies, all with different kinds of Maserati cars on set, from “Story of a Love Affair” by Antonioni to “Ocean's Thirteen” with Clooney.

Italy – United States of America: it is only a short step from Modena to Hollywood. The USA is Trident’s first market, and also a country where the brand has always attracted a lot of enthusiasts. Its appeal derives first and foremost from the success it had on American soil, like the Indianapolis 500 in 1939 and 1940, the Pikes Peak in 1946, the 12 Hours of Sebring in 1957. Needless to say, the Stars and Stripes/Tricolour combination also impacted on cinema. Many actors – not only Americans – have driven or owned Maserati cars, from David Niven to Peter Sellers, to owners like Marcello Mastroianni, Peter Ustinov, Renato Rascel, Omar Sharif. Some of the Trident models appear in many movies.

In 1950 an A6 1500 made a debut in ‘Story of a Love Affair” by Michelangelo Antonioni, with Lucia Bosé. During the same year, the same model also appeared in “Sunday in August” by Luciano Emmer. Starting from 1955, Italy and the USA have given life to a series of memorable movies. “The Racers” (by Henry Hathaway), “Two weeks in another town” (by Vincent Minnelli), “Una vita difficile” (A difficult life) and “Il Boom” directed by Dino Risi and Vittorio De Sica, with Alberto Sordi. The year 1964 has arrived. The A6 GCS and the 3500 GT Spyder Vignale were the Maserati cars mostly used on sets during this time.

Next, the movie “The Birds, the Bees and the Italians” by Pietro Germi with Virna Lisi: it is the beginning of the best Italian production signed by Alberto Sordi, among which “Be Sick... It's Free” (Luigi Zampa), “Il Prof. Dott. Guido Tersilli” (Luciano Salce), “The Most Wonderful Evening of My Life” (Ettore Scola). Albertone tries almost every Maserati car, from the Mistral Spyder to the Quattroporte, via the Ghibli Spyder and the Indy.

The Maserati cars named after winds go down well on set. There is also a Ghibli in “La Piscine” with Alain Delon and Romy Schneider, in “In the Name of the Italian People” by Dino Risi, driven by Ugo Tognazzi, and in “Il secondo tragico Fantozzi” (The Second Tragic Fantozzi) by Luciano Salce with Paolo Villaggio. We also find Tognazzi at the wheel of a Mistral Spyder in “Baby Doll” by Franco Giraldi, while Alain Delon returns to the racetrack with a Merak in “Indian Summer” by Valerio Zurlini. Another Merak model celebrates Adriano Celentano and Eleonora Giorgi in “Velvet Hands”.

In more recent years, a Quattroporte has appeared in “The running man” by Paul Michael Glaser with Arnold Schwarzenegger. Then we get to 2003: first of all, there is “Charlie’s Angels II”, the movie which marked the new Maserati range returning to Hollywood, again being commercialised in the USA. Cameron Diaz, Drew Barrymore, Lucy Liu, Demi Moore, are the stars, the Maserati Spyder with a 4,200 cm3 engine seems happy among the divas.

Followed by “Underworld” with Kate Beckinsale and Scott Speedman, and “The Prince and Me” with Julia Stiles and Luke Mably, both movies with the 3200GT. Last but not least, in 2007, for a new leap in quality, the new Quattroporte is main player in “Ocean’s Thirteen” by and with George Clooney, together with Brad Pitt, Matt Damon, Al Pacino and Andy Garcia.