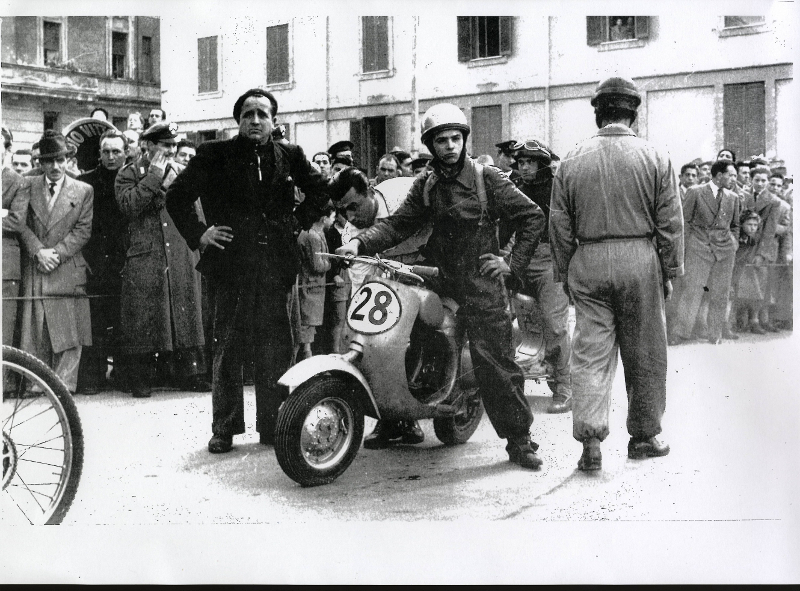 Young Giuseppe Cau marked Vespa’s success in the racing world, becoming a trusted rider and fully captivating the spirit of the new vehicle.

“Giuseppe, your ideal means of transportation is the Vespa [link 1946 Vespa] by Piaggio. Small as you are, who’s going to stop you on one of those?” Those were the words of Luciano Moroni, owner of a little workshop in Aversa during post-war years. The “Giuseppe” he was speaking to turned out to be young Giuseppe Cau, an employee: 17 years old, 42 kg, bright eyes and dirty hands from engine oil.

Giuseppe Cau did the job he loved. At Moroni’s workshop, built by the Ministry of Reconstruction, he took on used motorcycles abandoned by Americans and English people during the war. Norton, Triumph, BSA, Matchless: Moroni and his collaborators modified them, transformed them into civilian motorcycles and sold them on.

When the first Vespa dealership arrived in Rome, the new vehicle made its way to the Moroni workshop. It’s a strange vehicle: it has small wheels, it does not have a central column, visually it looks like it’s about to break. Also, it buzzes. In reality, the vehicle is appreciated, but at marketing level – as we would say today - it would need an extra push, - confirmation that it was in fact safe and boasted high performance. What better solution than to take part in races and competitions? And what better rider if not the little and deft Giuseppe Cau?

The way Moroni saw it, Cau perfectly fashioned the new “spirit of Vespa”. Thus, the young man made his way to Pontedera and started his association with the Vespa Racing Team (Squadra Corse Vespa - SCV), turned into Squadra Acrobatica Vespa (Vespa Acrobatic Team), soon collecting triumphs in hill and endurance races, even beating “normal” motorcycles. The bet is soon won and from that moment on Giuseppe Cau remained by Piaggio’s side as rider, mechanic, tester and valuable advisor of new ideas.