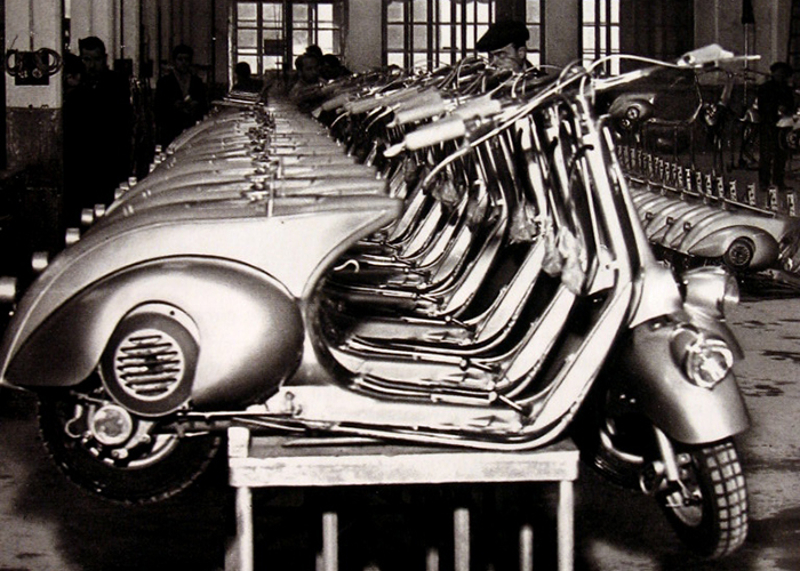 The Vespa was born in 1946, a true revolution in mass transport on two wheels and fruit of the creative genius of Corradino d'Ascanio as well as the conversion of the arms industry.

With the end of the Second World War, Piaggio risks closure. There was no longer any sense in the arms industry, the aircraft market suffered a big contraction, the same Pontedera is a heap of rubble. However, Enrico Piaggio did not surrender. On the contrary, he evolved an idea. He threw himself into the two-wheeled business producing a new light and economical vehicle. A vehicle that could help Italy set off again. To do that, he needed the collaboration of the ingenious Corradino d'Ascanio.

The engineer faced a challenge. He no longer needed to ‘think airplanes’, but come up with a terrestrial means of transport. To make it better he cleared his mind from prototypes that are already in existence. He therefore designed a self-supporting bodywork, built by printing indentations on sheet metal to lower production costs. He thinks of attaching the starter motor of an aeroplane directly on the hub of the wheel. He also thinks of a new market segment, i.e. women, by developing the idea of a vehicle that can be driven by sitting in a seat in a natural posture, without legs astride.

Enrico Piaggio’s entrepreneurship and d’Ascanio’s creativity were joined by the professionalism of the artisans and workers of Pontedera who created the new model. The patent is deposited in Florence on the 23rd April 1946. D’Ascanio himself invented the name: the product of rebirth will be called Vespa, because when it shoots past in the street it seems to be buzzing.

The Vespa is put on production in the face of much scepticism, but is an immediate success. It will become a legend way beyond the confines of Italy, also thanks to movies like “Vacanze Romane” (Roman Holiday - 1953) where a charismatic Gregory Peck frolics around Rome on a Vespa together with a gorgeous Audrey Hepburn. Three years later, the new vehicle celebrates producing its millionth exemplar.

We can fully agree that the Vespa is the symbol of mass motorisation, of the economic boom, and of women's access to the world of wheels. But above all, it’s the symbol of a rebirth that started – literally - from the rubble of war.