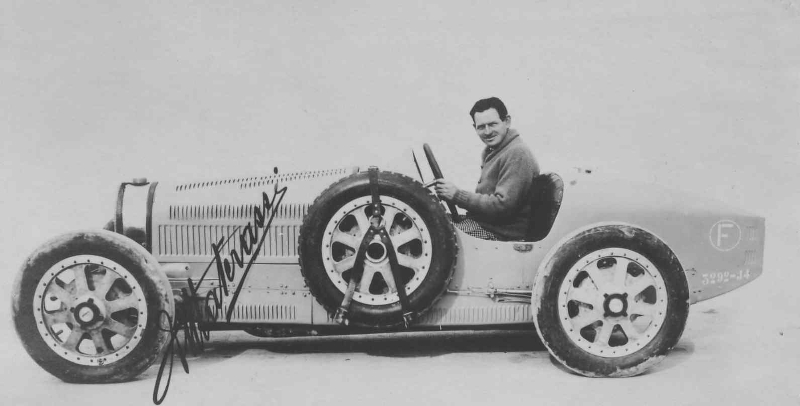 One of the most famous citizens of Mugello is Emilio Materassi, the coach driver that terrorised passengers with his crazy speed, who became a real racing driver and died at Monza in 1928.

There is a curve at the Mugello racetrack which is called Curva Materassi (Materassi curve). Short, detached and daring. Its name comes from Emilio Materassi, a reckless bus driver in Mugello with a passion for racing.

Materassi was born in Borgo San Lorenzo in 1894, and his parents had nothing to do with motors. They had a ropes workshop and that's where our man started working as an apprentice. However, his talent lied elsewhere: he soon became a cyclist mechanic, then passed on to motorbikes and finally to rare cars. The turning point came in 1919, when he was hired as a bus driver at SITA and moved to Florence. Here he got to know the most popular Florentine motorsports personalities, such as Brilli-Peri and the Counts Masetti, as well as the Bolognese brothers Ernesto and Alfieri Maserati.

It was precisely with the help of his driver friends that Materassi made his debut in racing. The year is still 1919, and the competition is the Coppa della Consuma. The car is an Isotta Fraschini model, probably provided by Maserati. The debut was promising: Materassi achieves a third place in the class up to 5,000 cc despite a flat tyre. Unfortunately, the young bus driver and beginner racing driver did not have enough money to compete so assiduously. He unleashed his passion at the wheel of his bus, driving at full speed on the winding and pot-holed streets of Mugello, terrorising his passengers. This behaviour will get him fired.

In one way or the other, Materassi keep racing thanks to his friends and drivers who loaned him their cars. The first success came in 1920, again in the Coppa della Consuma, aboard a Fiat 20-30 HP. Then, the year after, the second breakthrough. Materassi was hired by the Turin-based car company Itala, also becoming their dealer in Florence. However, he was not entirely satisfied: official cars were not powerful enough for his liking, so he decided to modify an Itala "55", equipping it with a Hispano-Suiza airplane engine. And thus the "Italona", as Materassi himself called it, was deployed in the Parma-Poggio of Berceto race in 1924 and immediately proved to be competitive, achieving an overall second place behind Alfa Romeo.

Matterassi was not going to stop. He joined the official team of Bugatti, which won the Tripoli Grand Prix and the Targa Florio. He kept racing, becoming Italian champion on the Savio and Montenero circuits. He reached a good social standing, marrying Norma Parolai and became father of two daughters. He also decided to create his own racing team by buying four Talbots and fine-tuning them to eliminate their weaknesses. All this in just a few years. Unfortunately, his last race was around the corner.

On the 9th September 1928, at the Monza Circuit, attempting to overtake Giulio Foresti at the 17th lap, Materassi’s Talbot Darracq 700 swerved without any apparent reason. Having lost control, the car hit a wall and swooped down onto spectators at 200 km/h. The toll is severe: 22 deaths among the spectators and 40 injured. Emilio Materassi is thrown out of the car and thrown among the public. He will get up again, they said, only for a few moments: he talked to people, then fell to the ground and died of a cerebral haemorrhage at the age of 34.

Today Matterassi is commemorated by a statue created by sculptor Farney and placed in San Piero a Sieve, at the crossroads with Mozzette. Of course, the Mugello Racetrack curve that bears his name represents another tribute to this driver.