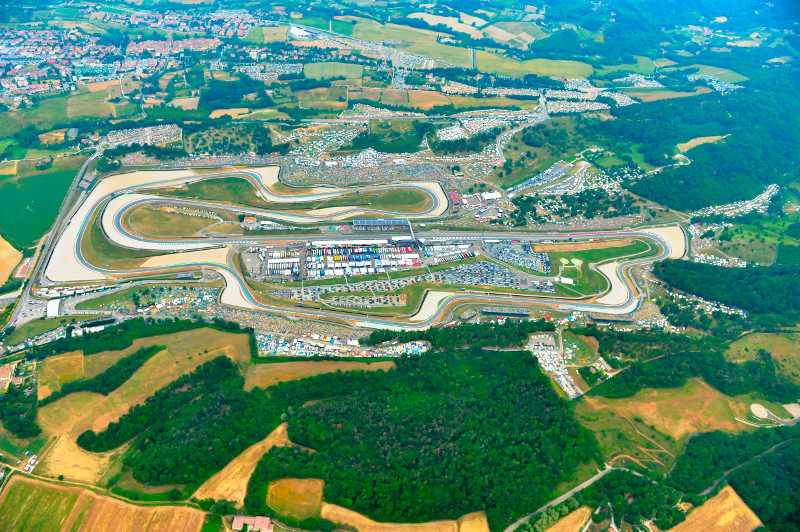 In 1972 began the construction of the Mugello Racetrack to have races organised in maximum safety: opened two years later, today it hosts the MotoGP.

The watershed year in the history of the Mugello Circuit was 1972. The road circuit, after having been inaugurated in 1914, alternates in short periods of use and long periods of abandonment up to the definitive rebirth in 1964. Despite the conditions being good and being thrown in this period the foundations for the current good fortune of Mugello, there was still a problem that beset races organised here: safety.

Between 1967 and 1970 two accidents took place at the Mugello circuit: in the first one the driver Gunter Klass lost his life, and in the second one the Alfa Romeo driven by Spartaco Dini ran over and killed a child who was attending the test session. In 1971, the authorities in charge of managing safety required the fencing of the whole 65-km route. The requirement is impossible to meet, and once again this is the end of the Mugello circuit. However, this is the time for a new beginning.

In 1972, works began to build an official circuit, the Mugello Racetrack, between the municipalities of Scarperia and San Piero, interested from the very beginning by the passage of the original road track. The initiative was taken, as always, by the Automobile Club of Florence. The chosen area measured 170 hectares, the design was awarded at Ing. Gianfranco Agnoletto and track was inaugurated on 23rd June 1974 with a race dedicated to Formula 5000 single-seaters. 60 years and 2 days had passed from the first race at Mugello.

While renovated over the years, the Racetrack has not undergone any change in the route, made quite unique on the international scene. The track measures 5245 meters. It has an uphill straight that measures over 1 km - where 990 cc MotoGP bikes reach a speed of about 340 km/h - severe slope changes and very fast, blind and challenging curves, such as the "Arrabbiata 1", the "Arrabbiata 2" and the "Materassi Curve". One also notes the Casanova-Savelli, a right-left downhill chicane, important for lap time. Another fundamental point is the "San Donato" curve, the first of the track (located at the bottom of the abovementioned straight), where it is important to brake as late as possible.

Today, the main race held at the Racetrack is the MotoGP Italian Grand Prix, which takes place at the beginning of June. In addition, the circuit hosts test sessions carried out by F1 racing teams, the leading companies in the MotoGP World Championships and the Superbike World Championship as well as national and international motorcycle and motorcycle manufacturers. In addition to Formula 5000, the first to race here, the circuit hosted the Formula 3000, Formula 2, and the Fia-Gt championship. Plus, it is the the only Italian plant to have hosted the ITC. It is also a joy for the spectators, who can "participate" with great intensity at the races thanks to the natural stands along the entire ring of the track.