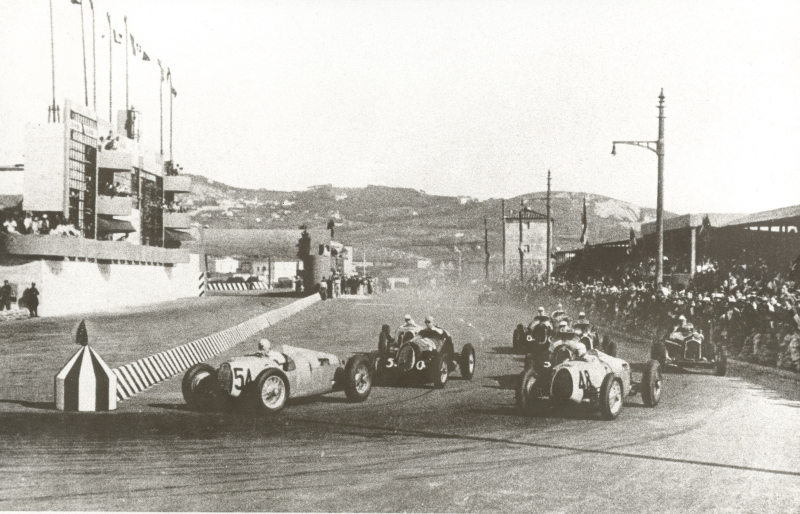 Between 1953 and 1955 racing returned to Mugello and the rest of Tuscany, before a new stop was imposed by the lack of adequate safety conditions.

The controversial 1929 race at the Mugello Circuit was followed by a long period of pause imposed by Costanzo and Galeazzo Ciano in favour of the Montenero Circuit. The Second World War, that would soon bloody the country, once again took away the chance and the desire to race. It was not until the 1947 edition of the Mille Miglia that we saw cars whizzing through the streets, as in the good old days. But not for long.

In the post-war period, racing returned to Tuscany as well. Between 1947 and 1954 a “shorter version” sort of the Mille Miglia is run: the “Coppa della Toscana” (Tuscan Cup). In addition to this race, in 1953 the Siena-Florence race took place, while the following year it was the turn of the Florence-Siena, both run on the Via Cassia. Other Tuscan races that followed in these years were the “Circuito delle Cascine”, a few editions of the Montenero circuit, the Balestrero Cup of Lucca, and the evergreen hill climbs like the Coppa della Consuma and Florence-Fiesole.

What about the Mugello circuit? The right moment arrived even for it, first of all with motorcycle races held between 1953 and 1954. Then, the organisational problems of the 1955 Coppa della Toscana persuaded the managers of the Automobile Club Florence to reintroduce the Mugello race. A car race and a motorcycle race took place, the first on the 5th June and the second on the 12th June: both were run on the short version of the Barberino del Mugello Circuit.

The car race was appreciated by the audience due to its formula. Unlike the Mille Miglia or the Coppa della Toscana, where all the contestants paraded one at a time, in this race the audience could witness duels and overtakes throughout the 15 laps. Unfortunately, the 1955 edition remains a rarity and, in the immediate years that followed, did not have a replica.

A serious accident occurred at the 1957 Mille Miglia, in which the Marquis Alfonso de Portago, his co-driver and ten spectators lost their lives, further complicated things. At this point, at national level, many races – especially the Mille Miglia – were abolished with the exception of the Targa Florio, deeply defended by the Sicilian enthusiasts. For quite some time time, hill climbs and races disputed at structured circuits like Monza were the only sites considered safe enough for drivers and spectators.