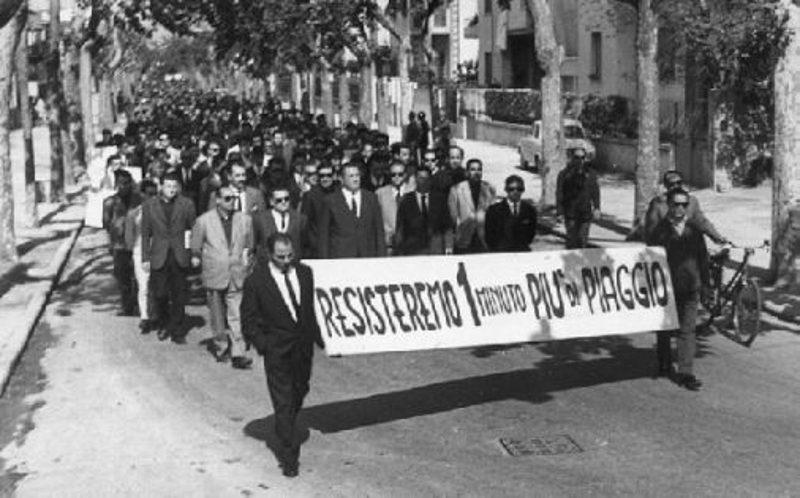 From the 50’s onwards, while the Vespa takes wing, social tensions ignited at the Piaggio company, evolving into the historical “big strike” of 1961.

It would be easy to superimpose the entire success story of Vespa on the historical and motoring exploits of Pontedera. Easy, but not entirely accurate. The Vespa determines the rebirth of the city from its rubble, that’s for sure. But during the 50’s, the spirits of Vespa and Pontedera began to diverge.

From one side, the Vespa soars to international success as a brilliant and popular object, of cult status but at the same time accessible to many. On the other side, in the city of Pontedera, Vespa means work. Work means blue uniforms, assembly lines, workers: the engine of growth for the whole area.

The Vespa’s success gave Piaggio workers strength, empowering them with a great contractual credence, sometimes to the outer reaches of blackmail towards the company. Tensions began to surface, while the lucky vehicle appeared on film screens and its sales exceeded 1,000,000 exemplars. At the same time, tensions became the driving force for social emancipation through struggle, until the famous ‘big strike’ of 1961.

With the aim in mind of receiving better working conditions and a higher salary, the workers folded their arms for a good 75 days in a row. Owners and workers will be brought back on the same level only by the flood of 1966. Once faced with the disaster that hits their factory, both classes will find one another side by side to shovel mud and water, in the spirit of unanimous attachment to Piaggio.