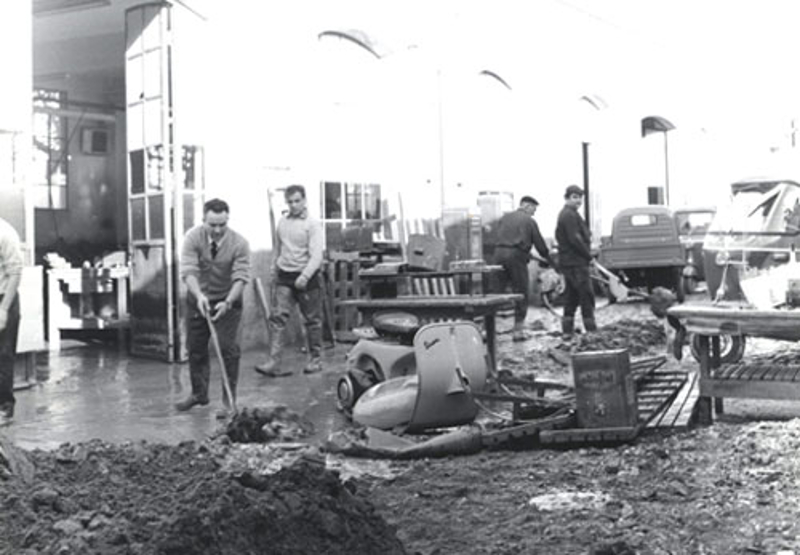 In 1966 the Piaggio factory was hit by a flood and put back in order thanks to cooperation between workers and management, who until that point had been divided by strikes.

4th November 1966. The date is in everyone’s thoughts, just like the imagery of Florence immersed by the Arno river which broke its banks on that day. The rest of Tuscany was also affected by the flood, especially the places along the river. Among these, Piaggio’s headquarters in Pontedera.

In fact, the city was immersed by the waters of the river Era, a tributary of the Arno river, which did not spare the renowned Vespa plant. The workers on site tried to block the ground floor shops up with sand bags with the help of other workers who came to offer their help. These were years of strikes and social upheaval, but the urge to save their own factory is immediately given credence.

Many workers were stuck inside through the night, watching the river surround the plant, take cars, objects and logs away with it and enter the factory premises. In the morning, the city and factory are immersed in water. Work was undertaken day and night with a watering pump to empty offices and damaged units. Employees pulled up their sleeves first, but among them there was Umberto Agnelli.

Agnelli joins the management a year earlier in October 1965, after Enrico Piaggio’s death. During the days of the flood, he worked side by side with his co-workers, wearing the same rubber boots as them, shovelling mud to be able to restart production. As the saying goes, the water has levelled the roles: there are no more managers and employees, owners and workers scenarios like when they had been so strongly opposed to one another during the strikes. During the days of the flood, the only noticeable social interaction that could be seen is people who were all on the same boat (in every sense!) and who showed a heartfelt attachment to their job and company.