The reason why Monza is added to the Rete Città dei Motori (National Motor Cities Network) is because of the construction which makes the city known internationally: the racetrack, known as the “Temple of Speed”. Built in 1922 inside Monza Park according to the design developed by the Italian Automobile Club, the route hosts a rich schedule of events and features which give spectators adrenaline emotions. Among the most recurrent shows there is the Formula 1 Italian Gran Prix, which has always been held at the Monza National Racetrack since its foundation, except in the years 1937 (Livorno), 1947 (Milan), 1948 (Turin) and 1980 (Imola).

The legends of car racing have competed here, and on this racetrack some great sport-related and technological innovations have been tested, such as the disc brakes, guard-rails and the draining asphalt. The complex also hosts international musical events, festivals and expos.

Monza is rich in history and places of artistic interest. Its foundations probably dates back to the Roman age, and it owes is fortune to barbaric invasions. In the 7th century the city becomes the capital of the Longobard Kingdom, then coming under Milan rule during the medieval times. In any case, Monza keeps its importance even during the Habsburg and Napoleonic reigns, as buildings and monuments which are still standing can testify. In 1900 King Umberto I was assassinated here by the anarchist Gaetano Bresci, and in 1922 the city becomes the site for the Italian Grand Prix thanks to the construction of the famous racetrack, the sacred temple of engines.

Monza Park
It is the biggest fenced park in Europe and is the green heart of Monza. There are more than 700 hectares of meadows and woodlands, a river, small lakes and rare essences, perfect for walking, cycling or going on the coloured train. From 1922 it hosts the National Monza Autodrome, the “temple of speed”, where the most exciting cars and motorcycle races take place, a site of great international events.

The Royal Residence of Monza
Built between 1777 and 1780 according to plans by Giuseppe Piermarini, it is an imposing example of neoclassical architecture, recently renovated and opened to the public. Wanted by the Habsburgs as a private residence during the Austrian rule, it has hosted the Savoia in its chambers, the last rulers to inhabit it.

Monza Cathedral and the Iron Crown

The Longobard queen Theodelinda makes Monza the capital of the Longobard Kingdom. The Monza Cathedral holds a series of 14th century frescoes which tell the story of the queen. On the inside, the chapel devoted to Theodelinda safeguards the precious Corona Ferrea, the Iron Crown with which kings and emperors were crowned, among them Charlemagne and Napoleon. According to an ancient tradition, the ring on the inside of the crown was made from one of the nails of the Cross of Christ.

After being closed for 30 years, in 2014 the Monza Museums have reopened to the public, hosted in the medieval complex of the Casa degli Umiliati (House of the Humiliated). It is a structure that guards the city’s memory, where collections are exhibited which span from archaeological finds to contemporary art.

The Arengario
Literally ‘place for assemblies,’ the imposing edifice from the 13th century has in the past hosted the civil powers of the city. Now its arches are the pulsating heart of city life, the physical centre from which the main roads go out from and along which the Monzese locals arrange to meet up.

The convent of San Maurizio and Santa Margherita
The church, completely rebuilt during the 1700s,  is of medieval origin. It is the keeper of the memory of the exploits of Virginia De Leyva, who lived between the 1500s and 1600s and has entered into the collective imagination as the Nun of Monza in the novel “I Promessi Sposi” (the Bethrothed).

The bridges on the Lambro river
In Monza it is mandatory to take a walk along the Lambro river and discover the numerous ancient bridges which cross over it, from the monumental Ponte dei Leoni (Lions Bridge) to the 14th century Ponte Nuovo (New Bridge). From here it is possible to catch sight of the great wall that was at the base of the medieval walls, demolished in the 19th century.

Santa Maria delle Grazie
This suggestive Franciscan sanctuary originates from 1463, when the Minori Osservanti Monks established themselves in this peripheral area along the Lambro river, outside of the walls surrounding Monza.

Cappella Espiatoria (Expiatory Chapel)
Designed by Giuseppe Sacconi, the same architect of the Altare della Patria (Altar of the Fatherland) in Rome, the chapel stands at the exact point where, on the 29th July 1900, the anarchist Gaetano Bresci murdered King Umberto I of Savoia. Inaugurated on the tenth anniversary of the murder, its interior is resplendent with mosaics.

The National Monza racetrack was built in just 110 days, on Alfredo Rosselli's design and commissioned by the Milan Automobile Club for its the twenty-fifth year of involvement. The aim was for it to become the official racetrack for G.P.s in Italy.

The Park of Monza. 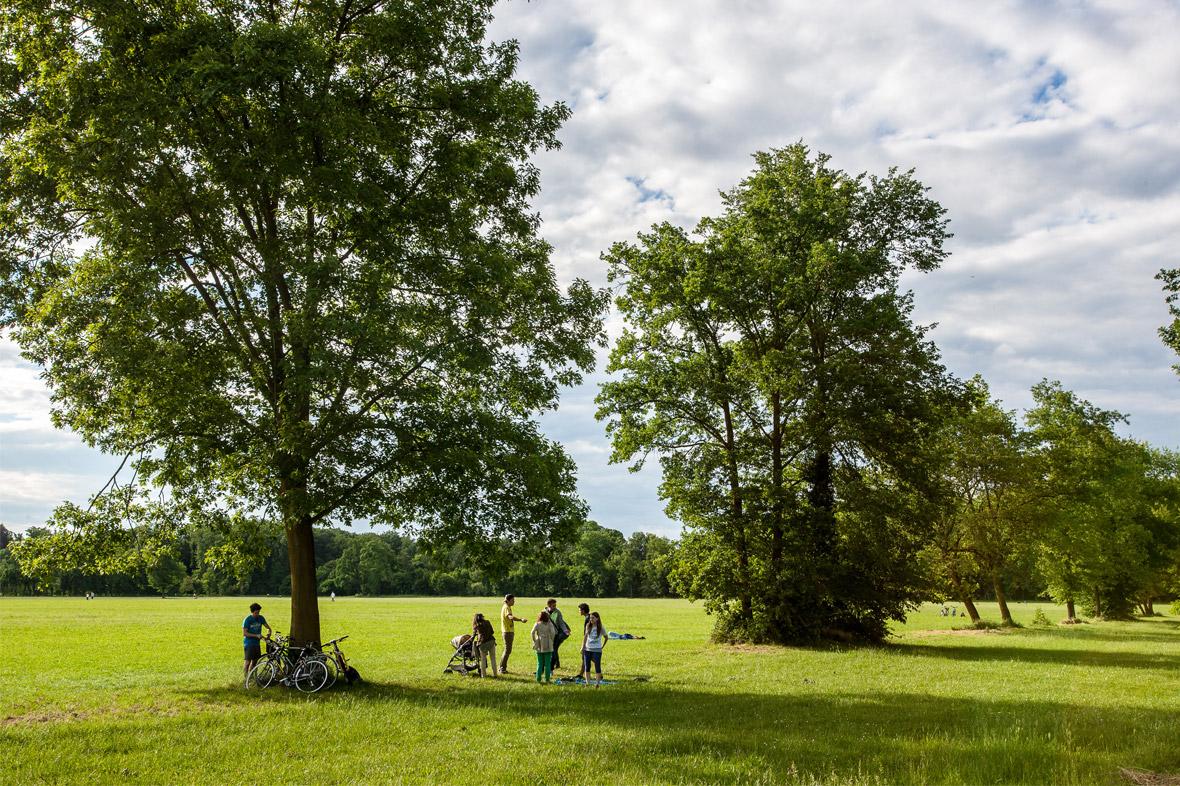 Fans celebrating with a pitch invasion at Monza racetrack. 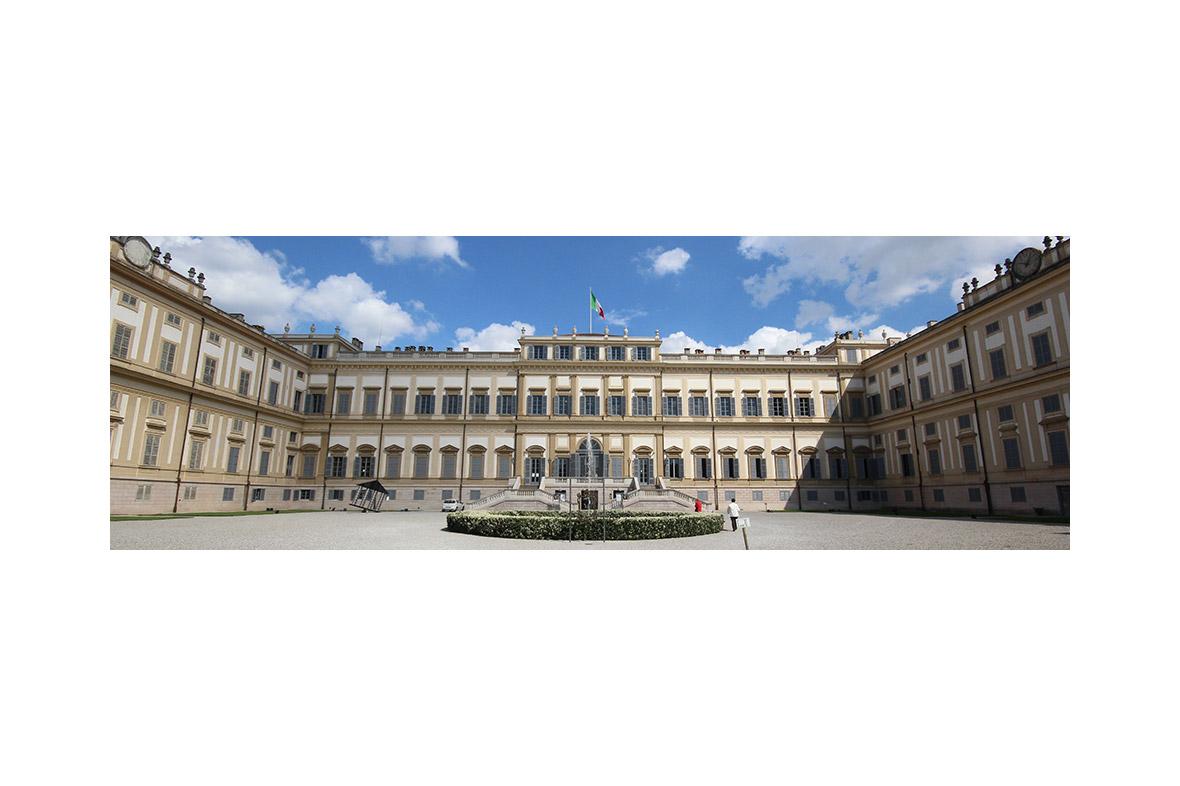 Air view of the racetrack in Monza. 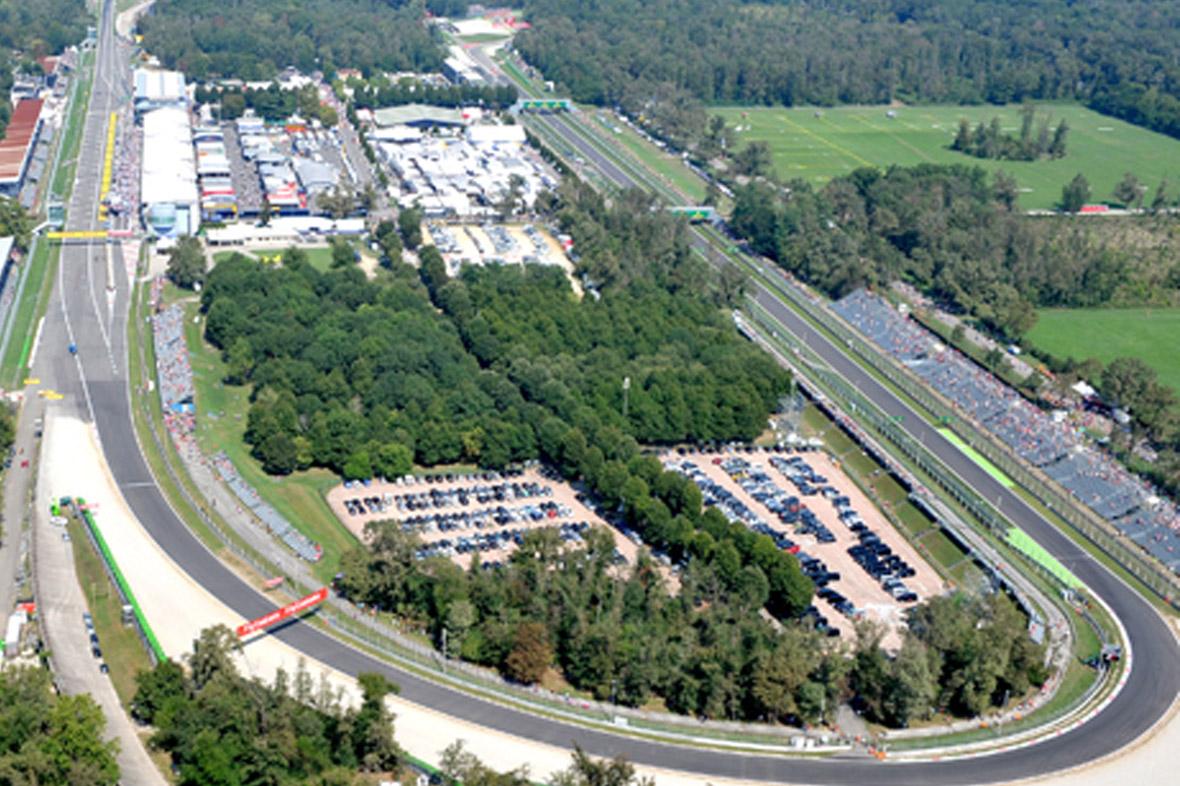