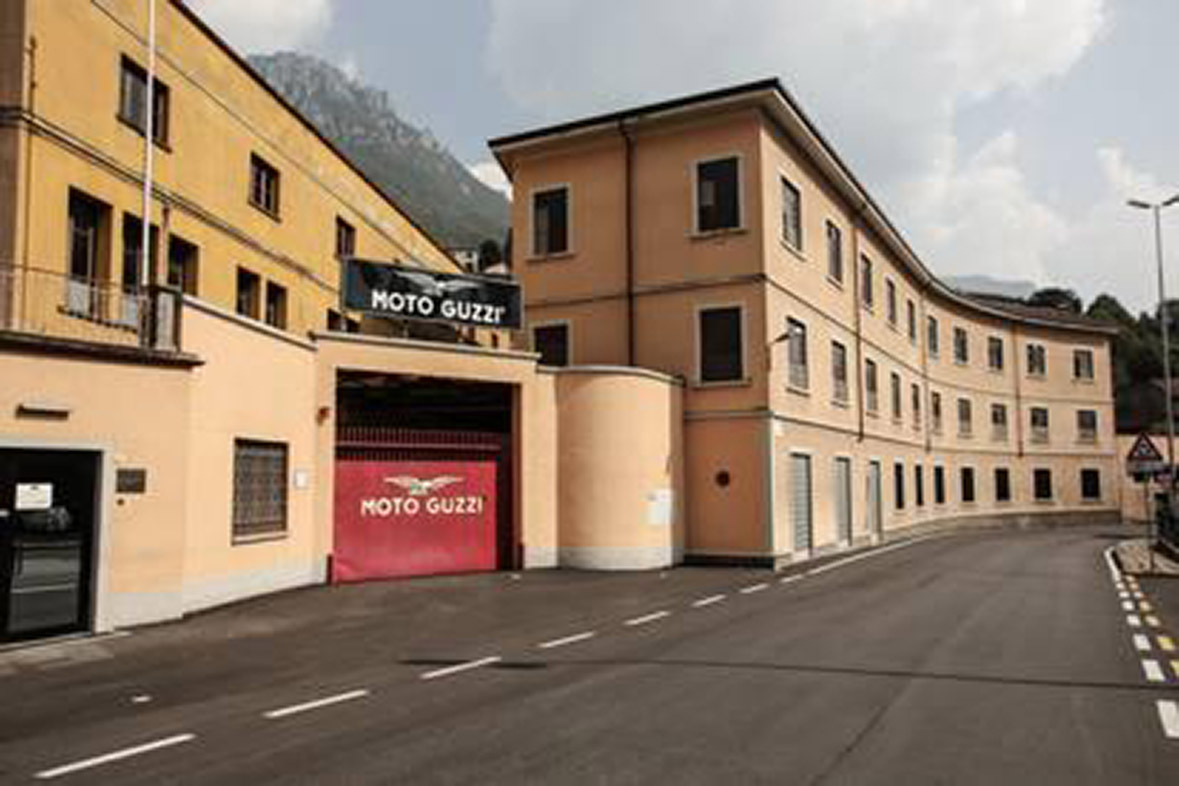 Mandello del Lario and Moto Guzzi: a bond born (almost) perchance in 1921, strengthened during the years spent at the business and in the countryside.

When Carlo Guzzi designed his first motorcycle in 1919, he chose Genova as the site for setting up the Società Anonima Moto Guzzi (Anonymous Moto Guzzi Society). The Parodi, his financiers, were Genovese ship-owners, and Carlo was also half Genovese. Furthermore, Genova was a city at the forefront of the mechanics sector due to the presence of Ansaldo. It was also upset by social upheaval, while the newly born enterprise needed a calm production environment. Madello del Lario, Guzzi’s town, turned out to be the winning choice for this. It was 15th March 1921.

At the end of that year, the Guzzi plant had stretched to 300 mq and employed 17 workers. The company was destined to grow to a staff of 1,590 during the 1950s (the highest count ever reached) expanding to 54,000 sqm. Thanks to its presence, it instantly created a demand in the area of Mandello, which favoured the settling of firms related to engines like Gilardoni Cilindri (cylinders) and Lafranconi Silenziatori (silencers).

Once production set off, Moto Guzzi overcame the 1930s crisis and the Second World War by building motorcycles for the army, however the company also built a reputation in the world of motorbike racing. Before abandoning the races in 1957, Guzzi collected 11 world speed records, 14 world championships, 55 foreign championships and 50 national speed championships. The key to success is aereodynamics. Models for racing and road use, such as Falcone, Condor, Cardellino, Airone, Galletto, underline this common denominator. As indeed does the emblem, an eagle spreading its wings, symbol of the royal Marines adopted in remembrance of Giovanni Ravelli, a pilot who died during a flight, and was a friend of Carlo Guzzi’s.

The establishment immediately followed a path of innovation. In the post-war period the company possesed two central electrical power generators, one radio tower to communicate with the subsidiaries of Milano and Genova, and a private fuel distributor, not to mention the very first Wind Gallery for tests on motorcycles. Furthermore, Moto Guzzi also made his way in the sectors of three-wheeler vans and agricultural machinery.

As the production grew, the bond with the city and its inhabitants became stronger, with many locals employed in the plant. Their freetime was also taken into consideration with the provision of after-work spaces mainly used for making music. And outside the company facilities, artists, writers and film-makers associated their own name and own realisations to the mythical Guzzi. Today the company based in Mandello is part of the Piaggio Group & Co S.p.a. as well as the Aprilia group, which already included Moto Guzzi.