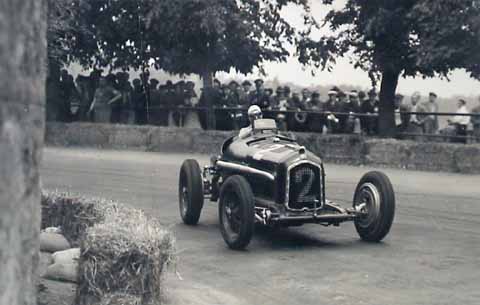 Tazio Nuvolari was born in 1892: a multiple motorcycle and car championship winner, he dominated the racing scene from 1922 to 1950 with record-breaking wins and endeavors that were at the limit of the impossible.

Usually, in the province of Mantua, there’s nothing but cold and fog in November. Yet, in 1892, on the 16th day of the month, an important birth occurred. Arturo Nuvolari was a farmer and a cyclist with several victories under his belt, although not as many as his brother, Giuseppe, who was an Italian champion. Arturo’s wife, Elisa Zorzi, gave birth to their fourth son: Tazio Nuvolari. Obviously, no one in the family yet knew that a champion had been born.

Little Tazio inherited a passion for sports. The spark ignited in 1904, when he saw a car race for the first time on the circuit in Brescia. Just a few months after that experience, Giuseppe taught him to ride a motorcycle. The next step towards four wheels is short. He was only 13 when he drove a car for the first time, his father’s. He had “stolen” it at night to take a moonlight ride. “I hadn’t gone over 30 km/h,” he would later tell. Both the car and little Tazio had returned home all in one piece.

During World War I, Nuvolari was called to drive ambulances and service cars. His first accident occurred at this time. “Forget about it. Cars aren’t your thing,” had said the officer who was in the car with him. Yet, instead… Nuvolari gets his license as a motorcycle racer in 1920. He was 28 years old, and he was already almost considered “too old”. However, in two years time, he became a professional racer and achieved his first wins. He also started to race cars and, in 1924, his meeting with a young Enzo Ferrari determined his subsequent collaboration with Alfa Romeo.

During his career, the “Flying Mantuan” - what Nuvolari was nicknamed because of his speed - reached an endless number of victories. On motorcycles, he had 49, of which 15 absolute and 34 for class, all concentrated between 1922 and 1930. His golden year on two-wheels was 1925, when he won his eighth absolute victory on a Bianchi 350, achieving three speed records.

As for cars, the count rose even higher: 55 absolute wins and another 37 in the category level. The first arrived in 1924, the last in 1950 when he was 58 years old. His golden year here was 1932: eleven wins in all. The winning cars he drove were Alfa Romeo, but also Chiribiri, Bugatti, Maserati, and Ferrari.

Record victories, endeavors at the limit of the impossible, alarming accidents, which he always survived. Yet, Nuvolari’s lucky agonistic story is counterbalanced by the misfortune of his private life. In fact, the driver lost both his children, torn away from him by an illness both at 18 years of age, and at 9 years distance one from the other, like an ugly twist of fate. He, instead, after a true “reckless life”, passed away in his bed on the 11th August 1953.