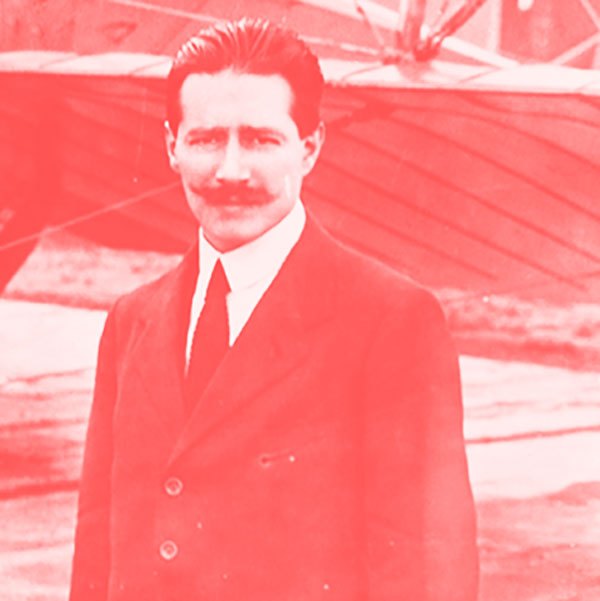 The pioneer of Italian aviation: from the dream of flying to one of the first great industrial groups in the production of airplanes.

Giovanni Battista Caproni, called "Gianni", was born in Massone di Arco, in the province of Trento on 3 July 1886. He graduated in civil engineering at the Polytechnic of Munich, completing his education in Belgium, where he developed his passion for aeronautics.

After searching for funding and support in France, he went back to Arco and with the help of his brother and several local craftsmen, he built his first flying prototype, which would remain in history under the name of Ca.1. The first flight of Caproni's creation took place in 1910 at the Cascina Malpensa, in Somma Lombardo. It was the beginning of an entrepreneurial adventure, which, despite many difficulties, would lead Caproni to becoming a pioneer of aviation thanks to his creativity and ability to innovate.

Between 1913 and 1914, Caproni created a strategic three-engine bomber biplane, an invention that would open a season of important military orders, especially after Italy entered the war in 1915. After World War I, the e1920s were a period of great development for Caproni, which assumed an international dimension by opening branches in many countries, including the United States, controlling several glorious brands as Isotta Fraschini and Officine Meccaniche Italiane Reggiane and produced all different types of planes: military, civilian, for rescue and tourism - as seaplanes.

The entry of Italy in World War II in 1940, brought the war production to the fore, from bombers to the famous fighters of the Officine Reggiane. However, under allied bombings, many factories suffered damage and destruction, while in the period after Armistice in 1943, the Germans started to deport plants and workforce, which Caproni himself would try to oppose. The conflict buckled the company, which in fact would no longer recover, due also to Caproni being on the run in the period after Liberation, because of the accusation of collaboration, which he would later be absolved of.

This legal affair, along with the choice of the Italian government to supply itself with aeronautical material, mainly from overseas, would weigh on the Group's future, which would undergo a gradual downsizing, culminating in the closure of several historical factories. Gianni Caproni die din Rome on 27 October 1957.